Researchers have identified a two-dimensional metal carbide, a type of MXene, that exhibits the highest shielding effectiveness known to date.

While operating, cell phones, laptops, tablets and other electronics generate electromagnetic interference (EMI). This ubiquitous presence of EMI can result in the malfunction and degradation of electronics, and is particularly detrimental to portable devices that contain miniature electronic elements.[1] Additionally, researchers have raised concerns about the negative impact of EMI on  human health.[2] Shielding EMI has become critical and meaningful to propel the development of modern science.

Conventional EMI shielding materials are metals, such as copper and aluminum. The presence of free electrons is effective in absorbing electromagnetic waves. However, the rapid development of portable electronic devices, e.g., cell phones and instruments used for aerospace exploration, call for alternative EMI shielding materials with lightweight, mechanical stability, as well as chemical and temperature resistances. Driven by this motivation, carbon nanotubes and graphene sheets in combination with magnetic constituents (e.g., iron oxide), have been explored as possible EMI shields.[3] Yet their performance is still far below those achieved by their metal counterparts. 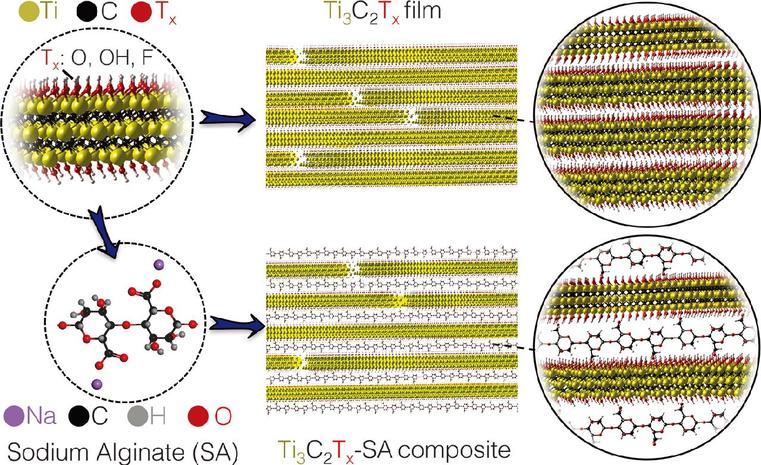 Figure 1 | Illustration of the laminated structure of Ti3C2Tx and Ti3C2Tx-sodium alginate composite. (Top) Ti3C2Tx possesses a structure that is similar to graphite, except that each layer is decorated with surface termination groups. (Bottom) Guest species such as sodium alginate shown here can reside in between layers, resulting in exfoliated structures with reduced layer thickness. Figure is from Ref.[4]
The Ti3C2Tx thin film possesses several unique properties that make it an exceptional EMI shielding material. Firstly, its laminated structure with adequate interlayer distance to host guest species such as sodium alginate, makes it easy to be processed into thin films by chemical or physical exfoliation. Thin films are desirable morphologies of EMI shielding materials as they contain less weight and can be easily coated on other irregularly shaped substrates, which is particularly  feasible for miniature electronics. Secondly, the metallic behavior of Ti3C2Tx ensures the rich amount of free electrons on the surface that can partially reflect the incident electromagnetic radiation. Thirdly, unlike bulky metals, Ti3C2Tx with inherent layered architecture allows electromagnetic waves that transmit the surface to bounce in between layers internally. That transmitted radiation will be gradually attenuated by the internal free electrons.

Figure 2 | EMI shielding performance of Ti3C2Tx thin film. (A) The proposed EMI shielding mechanism. The incident electromagnetic radiation striking the thin film is first reflected by the surface free electrons. The transmitted radiation is attenuated by internal electrons. (B) Plot of EMI shielding effectiveness (SE) vs. film thickness. The Ti3C2Tx thin film exhibits the highest EMI SE at thickness less than 100 μm, which is the highest value achieved known to date. Figure is from Ref.[4]
Setting a new record, the Ti3C2Tx thin film, with a thickness of 45 micrometers, achieved a shielding effectiveness value of 92 dB, equivalent to 99.99999994% absorption of electromagnetic radiation. The Ti3C2Tx-sodium alginate composite film with a thickness of between 8 and 9 μm displayed shielding effectiveness values up to ~60 dB depending on the content of sodium alginate. The performance at thicknesses less than 100 μm is substantially higher than those of the state-of-the-art carbon-based materials, and is comparable to some metals.

MXenes, discovered less than a decade ago, are arousing a vortex of worldwide attention. Researchers strive to recognize their potentials beyond their initial assignments as electrodes for batteries. The work discussed here is one representative example. In addition, a theoretical study carried out in 2017 suggested that there are millions of stable MXene compounds with different chemical properties remaining to be experimentally identified.[7] So vast in number, MXenes are believed to remain at the forefront of breakthroughs in materials research, including and beyond the EMI shielding highlighted by this article.

Acknowledgement
This highlight was proofread by Martina Morelli from University of California, Santa Cruz.